Six people who will tune in for this event are Norman’s adult children. Throughout his life, Norman has been married three times: to Charlotte Rosen, from 1943 until 1956; to Frances Loeb, from 1965 to 1985; and his third wife, Lyn Daviswhom he married in 1987. Get to know more about his family below.

Norman’s eldest child is Ellen Lear, who was born in 1947. She is the only child of Norman and Charlotte Rosen. In 1990, the Los Angeles Times listed that Ellen was “divorced” and worked “as a sex therapist” in New York.

“At close to 99, I can tell you that I’ve never lived alone. I’ve never laughed alone. And that has as much to do with my being here today as anything else I know,” Norman said in a 2021 speech after he was honored with the Carol Burnett Award at the Golden Globes. “I could not feel more blessed,” he said, adding that no one made him laugh harder than Carol Burnett. “So glad we had this time together,” he said at the end of his speech.

Kate Lear is the oldest of Norman’s two children with his late wife, Frances Loeb (Francis died in 1996 after battling breast cancer). Kate is a writer, arts advocate, and Board Chair of Ballet Hispánico, according to a 2022 listing on PBS. She’s also married to Jonathan LaPooka medical doctor often featured on CBS, and together, they have two children.

“To me, Norman Lear’s longevity has just as much to do with his in-born optimism,” Kate wrote about her father on his 100th birthday. “This is a man who goes to bed each night dreaming of the cup of coffee he will have in the morning, who has lived a life in which each meal magically turns out to be better than the one before (‘this is the best pasta I’ve ever had’”), and who has said, many times, that he doesn’t want to wake up the day that he doesn’t have hope.” 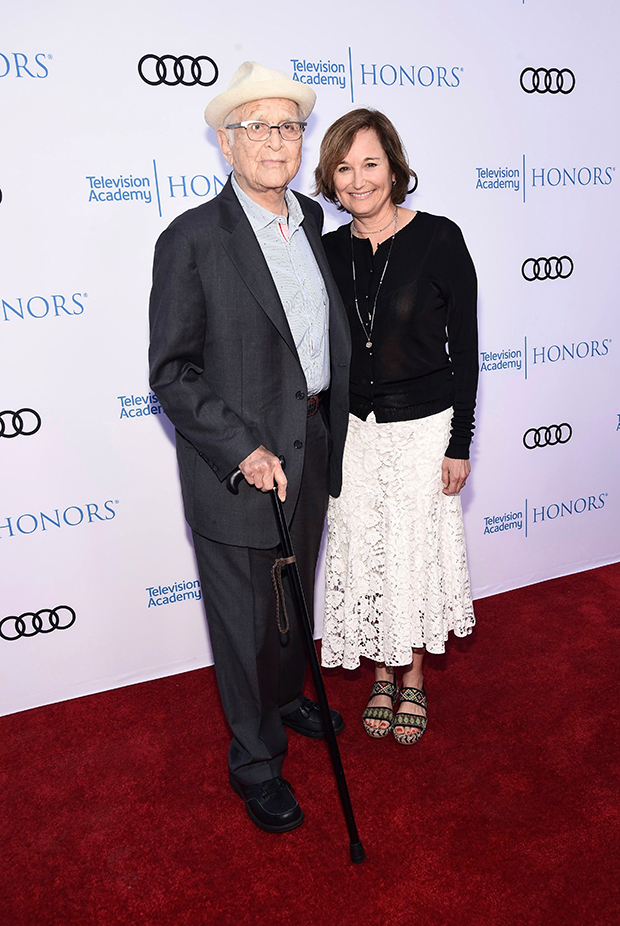 Maggie Lear, the youngest child of Norman Lear and Frances Loeb, obtained her master’s degree in social work from New York University. She is the President of The Frances Lear Foundation, a “family foundation that focuses on the environment, democracy, arts education, and criminal justice reform,” according to the Youth Representative website. “She works as a volunteer at Bottomless Closet to empower low-income women as they make their way into the workforce.”

“For the past eight years, she has been facilitating parent meetings in NYC’s Independent school system through Parents in Action. She is a Chair of the Youth Justice Funding Collaborative, a 21-year-old network of funders and developing who support organizations in New Orleans focused on decarceration. Maggie is a member of The Justice Fund at the New York Women’s Foundation as well as the FreeHer Fund at the Circle for Justice Innovations.”

Benjamin Lear – the eldest child of Norman and his third wife, Lyn Davis – was born in 1988. He’s the only child of Norman Lear to follow in his father’s footsteps. After studying music at New York University, he directed his first film, 2016’s The Call us Monsters. The documentary detailed “legislators debate legislation that allows for adult charges for juvenile offenders,” and the effect of the penile system has on young offenders. In 2017, Ben directed Bad For The Boatsa “metaphysical thriller masquerading as a farcical comedy about the devastating consequences of being a narcissistic asshole.”

“I knew he was a pretty big-time guy from very early on, but it had already been a whole generation since those shows were filling the airwaves,” Benjamin said of his father in 2016, per the Los Angeles Times. “I knew the characters. I had seen scenes of them. I could feel his humor and perspective in them. But I hadn’t really dug in.”

Norman and Lyn welcomed twins Madeline Rose and Brianna Elizabeth Lear in 1994. Norman was 72 at the time, and his wife was 47.

In the years since, Brianna attended the University of Southern California. “Growing up, we always saw plays and musical theater. Part of our time together which is, you know, maybe healthy and unhealthy [laughs], is we watch a lot of movies together. I definitely grew up as a child of the industry. My father and my Mom both really wanted me to pursue a career in acting and singing most of my life. That’s what I thought I wanted to pursue,” she said in a 2018 interview. “And then I ultimately shifted gears, but it’s still something that’s really important to me. I am constantly reminded of the power of music and art in my own self-care. It’s something I definitely miss. And I want to find ways of incorporating it more.”

Brianna was one of the teams of graduate students at the USC’s Suzanne Dworak-Peck School of Social Work. Though she didn’t enter the entertainment industry, Brianna shared her family’s commitment to social justice.

Madelaine has remained out of the spotlight, forging her own path.