Nan Whaley knew that the women of Ohio were not going to sit out the mid term elections, as soon as the news broke that the Supreme Court had reversed Roe V. Wade on June 24. The former Mayor of Dayton, who was running for Governor against incumbent Mike Dewine, joined a rally of over 5,000 people on the State House steps in Columbus, Ohio, and a Republican-identified woman who sought her out. “She came up to me,” Whaley tells HollywoodLife in an EXCLUSIVE interview. “And she told me, ‘I voted for DeWine, but no more, no more.”

That was the start of a massive shift in the dynamics of the race for Governor in Ohio, that Whaley is now seeing on a daily basis in the state which has trended red for the past ten years. “We’re seeing women, particularly Republican women, deciding that access to healthcare for their bodies is more important than anything else,” she says. But she has been surprised that it isn’t just women who are shocked and fearful after Governor DeWine signed a new “heartbeat” abortion bill into law, just seven hours after Roe fell.

The law, which was triggered by Roe ending (it was originally passed by the State Legislature in 2019), bans abortions after a fetal heartbeat can be detected, which is usually around six weeks of pregnancy before many women even know they are pregnant. There are no exceptions for rape and incest or if an embryo has a genetic disorder. The only exception is if there is a medical emergency which is defined as a “serious risk of the substantial and irreversible impairment of a major bodily function of a pregnant woman.” The law imposes felony criminal liability on anyone who performs or aids and abets an abortion.

Whaley reports that men in Ohio “are very worried about their daughters and their wives.” She relates that she went to a meeting in Youngstown while on the campaign trail, to meet voters who are in the building trades. They were mostly men. “I thought they’d want to talk about collective bargaining and prevailing wage issues — issues that are important to me too. But all they wanted to talk about was abortion access for their wives and daughters. And they kept coming back to it over and over again at the meeting,” she says. Now, she is seeing this same deep concern from men all across the state. “This is top of mind. And it has become ‘the issue‘ of the race.’

Whaley, who led Dayton, a city of over 140,000 for eight years, believes that Ohio is actually a pro-choice state. A Suffolk University/Cincinnati Enquirer poll of potential midterm voters done in June before Roe was overturned showed that 53% of voters wanted to protect abortion rights in Ohio, while 39% wanted the State Legislature to restrict abortions.

But that was before the abortion ban was actually imposed and became reality. The reality has meant that a 10 year old girl who was a rape victim was forced to cross state lines and obtain an abortion in Indiana. The case got national attention and horrified many Ohioans, including Whaley. It also brought home what the abortion ban was going to do to the women and girls of the state.

Liz Truss: 5 Things To Know About The UK’s Next Prime Minister

DeWine had nothing much to say about the girl’s devastating situation, except to call it a “tragedy.” He did not back down on his support for the ban and the Republican Ohio Attorney General David Yost skeptically told Fox News that “there is not a damn scintilla of evidence” that the pregnant 10 year old existed. That was before the rapist was caught and charged by Columbus police.

The AG may have wanted to downplay the true horror of Ohio’s abortion ban but the reality of its consequences have grabbed the attention of the state’s women. “The engagement of women has really been unparalleled. Like nothing I’ve seen before,” Whaley reports. “We’ve seen stories (in the news) of women who were excited to carry a pregnancy to term, go to their monthly checkup, find out they have cancer, and have to terminate the pregnancy in order to get life saving chemotherapy. And then in Mike DeWine’s Ohio, they’re told they’re not welcome here. They have to cross state lines to fight for their own lives.”

Whaely fears that DeWine, a longtime opponent of abortion, will be willing to sign Into law a bill that has been introduced into the Republican dominated state house that would ban abortion at the conception, which means a ban on abortion on birth control methods like the IUD , and which could also ban in vitro fertilization.

“As scary as the kind of thing we’re already seeing in the state, it will get worse if he is re-elected,” she warns. The bottom line for the women and all the voters of Ohio is — Whaley is their only chance if they want to have safe, legal abortion in the state again. They must elect her.

Even if democratic candidates to the State Legislature do well in the mid terms, the state is so gerrymandered that the Republicans will still command their state House and Senate. The Ohio state Supreme Court has already struck down three different sets of voting district maps for “violating the state’s constitutional prohibitions against partisan germrymandering and its proportionality standards.”

Interestingly, the Republican dominated Ohio Redistricting Commission refused to submit new “constitutional” maps before a court-imposed deadline. The result is that Ohio is being subjected to its highly gerrymandered maps once again for the 2022 midterms on November 8.

As a result Whaley calls the Ohio Legislature “illegitimate. It’s the legislature that “enthusiastically passed the anti-abortion “Heartbeat” law” So how will she succeed in giving Ohioans legal abortion again, if elected? 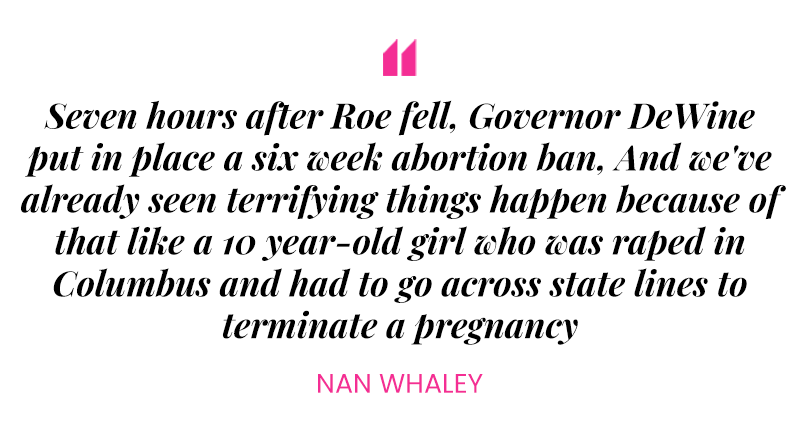 “The first thing that we will do immediately after winning, is we will work to put the codification of Roe into the Ohio constitution,” she tells HollywoodLife. “We’ll take it to the people and vote it. We know that this is a pro choice state. And so no matter what happens, women’s rights will be protected in Ohio, no matter what extremists come into government in the future.”

Whaley explains that she’ll get an amendment on the ballot to protect abortion rights, similar to what has now been done in Michigan. “I know that people will decide to make sure women have healthcare.”

Not surprisingly, Whaley is running her campaign messaging focused laser-like on protecting women’s abortion rights and literally their rights to healthcare. She is producing ads highlighting the true personal stories of women who absolutely needed abortions to save their lives. One is of a young mom of two, whose third pregnancy threatened her life due to an unexpected health complication. The ad features “Sara” who wouldn’t be alive today without an abortion. Today she is happily at 39 weeks in a healthy pregnancy.

Whaley is also the only chance for Ohioans to enact any sensible gun safety legislation. She was the Mayor of Dayton on August 4, 2019 when a 24 year old opened fire with a semiautomatic weapon into a crowded downtown area and nine people, including his own transgender brother, and wounded 17 others.

Whaley stoically held her devastated community together after the horror. She had to welcome President Trump to a city that was unenthusiastic about his visit. She also shared the stage with Governor DeWine at a public event where thousands of her citizens shouted so loudly that he needed to “Do something.” That he had to sit down, unable to finish his speech.

She recalls how the Governor called her the next day and said he intended to do something about gun safety. “I took him at his word. I like to work in a bipartisan way…I stood next to him as he unveiled a bill called Strong Ohio, around gun safety. And then I watched him do absolutely nothing to move it forward,” she recalls with frustration.

Instead, he signed a permitless concealed carry law and then he pushed forward a bill allowing teachers, bus drivers, and cafeteria workers to carry guns in schools. Whaley says that Ohio police oppose both bills. As do school staff. “Ohio is a common sense state and nine out of ten Ohioans want useful background checks,” she says. In, she asserts that, Ohio is “being governed by a tyrannical minority.”

She was looking forward to debating DeWine about gun safety, abortion rights and other issues, but so far he is refusing to take a debate. “I thought he at least believed in democracy. And debating is a key cornerstone of democracy,” she points out.

Like many other states in 2022, she agrees that democracy is on the ballot, with the Republican state party dominated by election deniers. Republican National Senate candidate JD Vance is a Trump-endorsed election denier running against Democrat Tim Ryan in a tight race. Whaley is also running neck and neck with DeWine in some of the recent polls.

“I trust women will save the day in this election. I know what is at stake – issues, literally about people’s life and death on abortion access and about the future of our democracy.” Supporting her is her husband of 15 years, Sam. “He’s definitely a partner in this and I have the support of my family, too.”

She says she loves to work in public service. “I am working class. My dad always said, ‘well, we can do one thing. And that’s work hard. And so that’ what I’ve done my entire life. It’s been an honor to get to do this work, it’s so meaningful. And it’s so important to the future of my community, my state, and my country.” 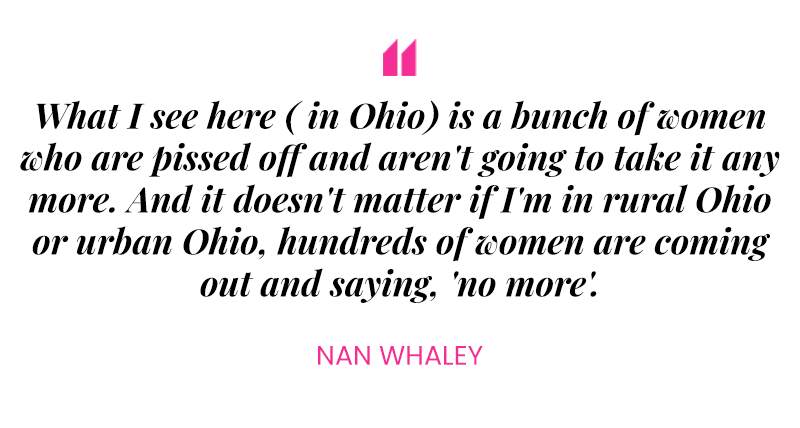 Never have those words been truer. Nan Whaley’s election is essential to the future of Ohio’s women and all who love them and think that is imperative that they make their own healthcare decisions, not politicians. She believes that Ohio’s women will vote in droves on Nov. 8 to do that. And in fact, women in Ohio are registering to vote in the tens of thousands.

Says Whaley, “what I see is a bunch of women who are pissed off and they aren’t going to take it anymore.”

To learn more about Nan Whaley go to her website. To register to vote, go to Vote.org.

No comments to show.
We use cookies to ensure that we give you the best experience on our website. If you continue to use this site we will assume that you are happy with it.Ok