The future of metal isn’t a black t-shirt but a pink camisole – but don’t get it twisted. It’s just as brutal and biting, as evident in Bimbocorethe debut EP from Scene Queen (out now on Hopeless Records). Over six surging tracks, Scene Queen delivers charisma, cuteness, and cunning lyrics against genre-blending music that incorporates pop, hip-hop, and metal. From raging against metal’s “acceptable” roles for women (“Bring It On”) to society’s expectations (“Pretty In Pink”) to how the industry overlooks female performers (“Pink Paper”) and the why-won’t-it- die practice of catcalling (“Pink Rover”), Bimbocore takes no prisoners in its metal take on “bimbocore,” the feminist celebration of hyper-femininity.

“It’s been so long that I’ve had these songs. I started writing this EP in March of 2021,” says Scene Queen while chatting EXCLUSIVELY with HollywoodLife. “So it’s been over a year now that I’ve had some of them. The first three singles I dropped, I wrote in March. So it’s been quite a while that I’ve been holding onto these songs.”

Fans will find that it has been worth the wait. Scene Queen’s aesthetic is a welcomed addition to the scene/emo landscape, citing Legally Blonde and Bring It On as much as The Black Parade and Hopeless Records legacy acts. “I think it’s the generation that grew up with these movies, right?” she says when discussing her embrace of the “bimbocore” outlook in her art. “I think millennials and people [of that age] who would’ve watched it now are growing up and seeing that hyper-feminine people were always considered the villain in media.”

“Now, we have this modern, feminist take,” she continues. “I think people are starting to realize, ‘was I afraid of being super feminine my whole life because people told me that’s what a mean girl is? That’s what this is.’ It goes with that whole modern feminist movement of ‘it’s okay to be feminine.’ You can be feminine and strong. You don’t have to isolate the two.”

“With bimbocore, it’s kind of been perfect just for me because like the bimbo movement on TikTok is happening at the same time as like this scene resurgence,” says Scene Queen. “Being able to combine the two is like kind of ideal because I’m able to give both messages. Like, ‘Hey, the scene has been traditionally toxic for a long time. We should change that. Also. Here’s like a cool, weird way of doing that.’ It’s all cool to see it happening on both sides, like in the ‘bimbo’ world and then in the scene world. There are these new feminist movements going on, and then seeing how the two like intertwine has been the most exciting part.”

This intertwining has been integral to Scene Queen’s ambitions with this musical incarnation.”I didn’t want this project to be like a tribute act, you know what I mean?” Scene Queen says, a life-long lover of punk, emo, and metal (check the receipts she brings on TikTok.).

“If I was gonna call myself ‘Scene Queen’ and look like full scene and have that extremely early 2000s or 2010s production — like all the like electronic, twinkly bits to it and everything — I think it would be trying too hard to appeal to a certain person,” she says. However, Scene Queen acknowledges that she’s got a “bit of that nostalgia-factor” in her music. Still, she’s also incorporated “some super GenZ to it.”

“I think I’ve been able to reach like this younger audience that has never experienced that scene culture for themselves. But also, some of the like millennial era people that are like, ‘Hey, this is kind of like what I listen to when in high school, but it’s new.’ So, I think it’s cool seeing the full range of people that have been into it.”

While Scene Queen’s appeal has crossed generations, the audience at her shows has been predominantly female, thus proving that she’s been successful in another one of her missions.

“Just seeing all the people that feel super-empowered by it,” she says with a smile, “like, ‘Hey, I never felt like I fully fit in the scene, but now it feels like there’s someone for me.’ Or even people that don’t look anything like me just being like, ‘Hey, I love the attitude behind this. It’s empowering to me to feel like there’s someone in the scene that’s pushing for it to go forward.”

She also values ​​her detractors, her critics, and those who may be gatekeeping the subculture. “Having all the arguments about whether this is seen or not, I feel like low-key benefits the scene in a way. Because when was the last time you heard people arguing about 2000s crunk-core music? You haven’t, really! And here we are, getting in heated debates about ‘what is metal’ and what is like crunk-core and what is metalcore and all these things.

“We’re talking about a genre that people have only talked about in a sense like, ‘oh, remember when?’ But now it’s back, and it’s here, you know? So I think it’s kind of cool to see all sides of the actions to it.”

Bimbcocore may be the crunkcore for the modern-day. But, what is it, you may ask? The “bimbocore” movement – ​​embracing bubblegum aesthetics because they want to, not because it’s catering to the male gaze – has taken a hold on TikTok. Hypebae’s summation says that today’s bimbos “[refuse] to dampen their sense of self for a society that is either unwilling or unable to view women as whole complex beings is an act of feminism itself.” The movement is firmly centered on TikTok, a platform that has helped Scene Queen’s success. “Pink Rover” spread like wildfire with its viral chorus (“Pink rover, pink rover / Please send the coward over / And if that bastard whistles / Put a knife up to his boner.”) As of May 2022, Scene Queen boasts nearly half-a-million followers on TikTok, with over 9.9 million likes.

However, in a show of the brains behind this beauty with the beastial breakdowns, Scene Queen is looking beyond the clock app. Before adopting the Scene Queen moniker, she was “working in the music works for a minute as a songwriter,” she tells HollywoodLife. “I’ve seen how projects live and die when they rely too much on one specific platform. With me, I think it’s really important right now that I’m using TikTok as a catalyst for like all of my social media. So using TikTok to create this cool YouTube presence, using TikTok to now like doing more stuff on Instagram, which I had never really used previously. I literally just started a Twitter.”

Scene Queen doesn’t want to be a “MySpace Band” or a group that relied on a single social media network in the early 2000s (especially if the platform goes away or gets bought up by a problematic billionaire or anything like that.) When Discord is brought up, Scene Queen laughs. “I literally am launching a disc. I’m very thankful that I have a younger audience that knows how to do things like that. I sent out a tweet saying, ‘Hey, I wanna start a Discord. Who can help me?’ And I had like 25 people being like, ‘oh, I’ve like assembled 15 different discs and like can totally organize it for you and then like to make your own graphics and stuff.’” 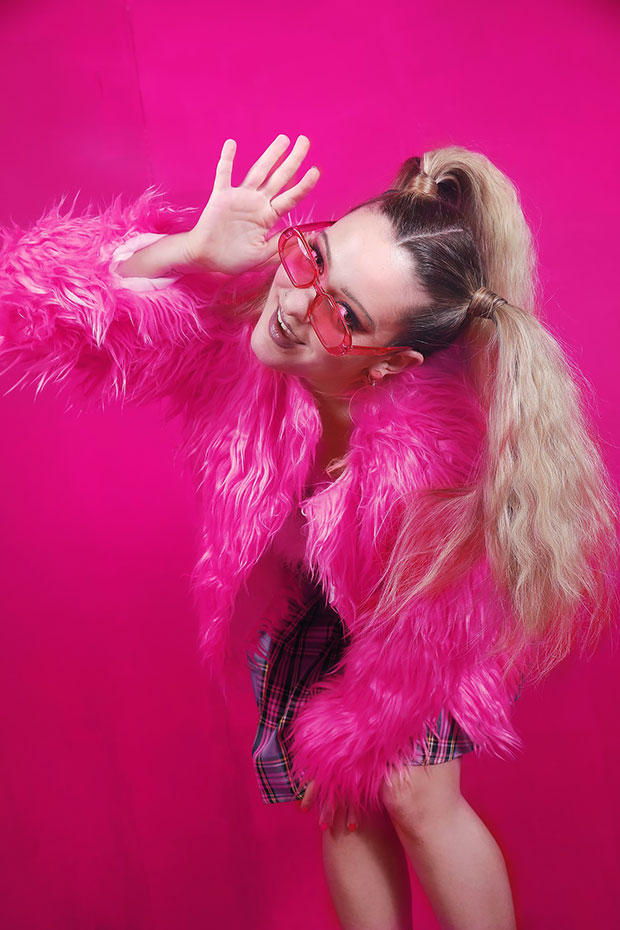 At the core of Scene Queen, of Bimbocore, is the music – and the chance to bring this music to her fans. “My whole career kind of happened over TikTok,” says Scene Queen, “and these are like the final moments where I’m like, ‘okay, this has been two years [of my life.].’ Two years ago, my debut single came out when I was an independent artist. Granted, my style shifted a little bit, but you know, from two years from that, it was like — my career didn’t exist. And then suddenly I got signed, and then all this stuff was happening. Everything is finally taking shape. I finally get to see the actual return on it live. So seeing people sing my songs live to me is gonna be like the most full-circle moment for all of this.”