The Cars movies are one of the most popular animated film franchises created by Pixar. And that’s saying something, considering the film studio is responsible for Toy Story, The Incredibles and more. But right now, it’s all about Cars — and more specifically, if a fourth movie is coming out! The first Cars movie was released in 2006, and was followed by Cars 2 in 2011 and Cars 3 in 2017. As of now, Pixar/Disney hasn’t confirmed that Cars 4 will be driving into the big screen. However, there is a spinoff series of the franchise coming out on Disney+ Day in September 2022. Cars on the Road will feature Owen Wilson and Larry the Cable Guy back as the voices of Lightning McQueen and Mater, respectively.

Rev your engines: Owen Wilson and Larry the Cable Guy return to voice Lightning McQueen and Mater in the #DisneyPlus Original Series: Cars on the Road, streaming in 2022! #DisneyPlusDay pic.twitter.com/NQCu5tW4we

Sadly, Disney has still made no mention of a Cars 4. However, there’s been some newfound hope for a fourth movie after Owen Wilson did a hilarious parody of a possible Cars 4 during his October 2021 appearance on SSaturday Night Live. More on that skit later, but for now, let’s go full throttle into everything fans need to know about a possible Cars 4.

The ‘Cars’ Franchise So Far

For those that haven’t seen it, Cars was created by John Lasseter and takes place in a world populated by talking vehicles — cars included. In the first film, Lightning (Owen) gets lost on his way to California in a race and ends up in Radiator Springs, a small town on Route 66. Lightning’s car is wrecked, and so he’s forced to remain in the town, which leads to him meeting new BFF Mater (Larry the Cable Guy) and Sally Carrera (Bonnie Hunt), whom he falls in love with. Other characters introduced include Doc Hudson (Paul NewmanLuigi (Tony ShaloubRamone (Cheech MarineThe King (Richard PettyChick Hicks (Michael Keaton) and more. At the end of the first movie, Lightning sets up his very own racing headquarters in Radiator Springs.

In Cars 2, Lightning competes in the first World Grand Prix in Europe, but he accidentally gets sucked into some international espionage drama. New characters in the second film include Finn McMissle (Michael CaineHolley Shiftwell (Emily MortimerFrancesco Bernoulli (John Turturro), Sir Miles Axlerod (Eddie Izzard) and Professor Zundapp (Thomas Kretschmann). six years later, Cars 3 came out and explored Lightning teaching a new generation of race cars. Some of those newbies included Cruz Ramirez (Cristela Alonzo), smokey (Chris CooperSterling (Nathan FillionJackson StormArmie Hammer), and Natalie Certain (Kerry Washington). At the end of the third film, Lightning decides to set his own racing career aside for the time being to train Cruz for the upcoming Piston Cup season.

The Cars franchise has expanded beyond just the three films. There’s been two spin-off films, Planes and Planes: Fire & Rescue, that were released by Disneytown Studios. There’s also been a few TV spin-offs called Car Toons that aired on Disney Channel and ABC Family. The animated spinoff series Cars on the Road is coming to Disney+ in September 2022 and will follow Lightning and Mater traveling the country.

‘Aquaman 2’: The Release Date, Cast & Everything Else You Need To Know

What We Know About ‘Cars 4’

All three Cars movies received positive reviews from fans and critics alike. In total, the films grossed over $1.4 billion in box office revenue worldwide. The first Cars was even nominated for the Academy Award for Best Animated Feature in 2007, but it lost out to Happy Feet. So based on all that, it’s likely Pixar/Disney would want to continue the successful franchise. However, the studios have lately been turning their attention towards creating original movies (like Soul, Onward and Luca), rather than creating sequels to their franchises like Toy Story and Cars. 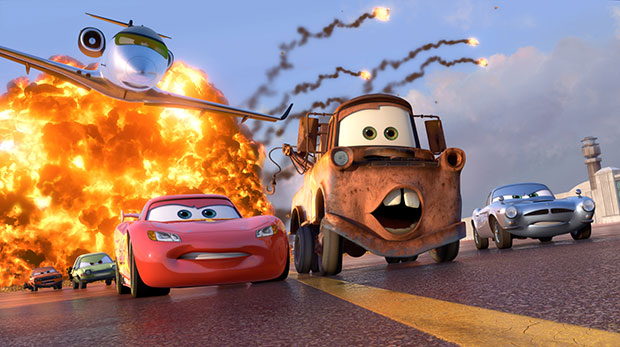 The good news is, some of the faces behind Cars have said before that a fourth movie is possible. “Like any sequel, from Toy Story 4 to Incredibles 2as long as there’s a good story to tell it’s worth investing, we do love these characters, we love them as much as the public does,” producers Kevin Reher and Andrea Warren said back in 2017. Meanwhile, Owen said at a Cars 3 press event that he has personal hopes for what a fourth film could be about. “I would imagine that if they do another one, it’ll be something pretty cool,” the actor said. “But yeah maybe like Lightning McQueen in sort of like a thriller. Maybe that could be something.”

In the Meantime, ‘SNL’ Has Some Ideas…

If Pixar/Disney needs some inspiration for Cars 4look no further than Owen’s hysterical SNL skit. Owen parodied a possible fourth film by uttering a series of innuendos and expletives while doing the voice acting for the fake movie. The scene also features Mikey Day and Punkie Johnson as Pixar executives leading Owen during the recording session. Owen’s co-star Larry (he voices Mater, in case you forgot) even appears and reads his lines beside Owen. Larry mentions the “R-word,” which Owen objects to. “This is a complete betrayal of a beloved character and I don’t want any part of it.” But Owen’s tune quickly changes when the executives show him his contract from Disney — and that gets Owen back on track for the job. We’re really hoping that this SNL skit will send Pixar/Disney into full speed ahead on creating Cars 4!

‘Cars on the Road’

The Cars on the Road spinoff series was officially announced in November 2021 on Disney+ Day. On August 1, 2022, Pixar/Disney announced that the show would premiere on Disney+ Day 2022 (September 8). The first trailer was released that same day. It features the returns of Lighting McQueen (Owen Wilson) and Mater (Larry the Cable Guy).

#LightningMcQueen and #Mater are back!

Watch the trailer for Disney and Pixar’s Cars on the Road and start streaming the Original series, a #DisneyPlusDay premiere, September 8 on @DisneyPlus. pic.twitter.com/s5JhHOBcEB

According to Disney, Cars on the Road “follows Lightning McQueen and his best friend Mater on a cross-country road trip”. These episodes are filled with lots of fun new characters, imaginative destinations as well as old friends checking in along the way.” Steve Purcell wrote the series while Pete Doctor and Marc Sondheimer are the producers. The nine-episode series premieres September 8 on Disney+.